I had so much fun at DragonCon this year! It was a blast to reunite with some amazing folks who I only pretty much get to see once a year, and it was so much fun being on the panels LGBTQIA in YA, Magic and Worldbuilding, Somewhere Over The Rainbow and the Craft of Dystopia!

This was also the first con where I got to debut some new swag and merch!

I loved being on the Magic in Worldbuilding panel in the Writer’s Track; it was so much fun getting to discuss craft and ideas for structuring magical systems in writing. One of my favorite things about worldbuilding is you have the opportunity to create a vast, unique world with its own set of rules, and then you can learn how to apply the exceptions and break those rules.

I also got to meet one of my favorite writers of all time, Jane Yolen. It was an honor getting to be on a panel with her!

I was on a panel with Jane Yolen! So incredible to meet one of my favorite authors whose work was so formative to me in both fantasy and worldbuilding and writing! #dragoncon2017

I love the YA Track at DragonCon so much! It was so wonderful to be back for LGBTQIA in YA and we had so much fun discussing craft, characters, book recs and giveaways! It was a full house and I’m still overwhelmed by how many people came to this particular panel. It’s so affirming to see so many excited faces in the crowd, especially when talking about books and characters you love.

had such a wonderful time at the LGBTQIA in YA panel with Moe Ferrara, Lauren Karcz, Carole Barrowman, Chris Elliot, and Steve Bergman ! #dragoncon2017 #LGBTYA

Another amazing panel I had the opportunity to be on was the Craft of Dystopia in the Apocalypse Rising track with Abbey White, Ben Fisher, and Taylor Brooke! This was such a fantastic discussion as we got to talk about what distinguishes post-apocalyptic from dystopia genres, when and if they collide, and all about challenging gender roles and being inclusive in these new worlds. It was also great to talk about dystopia as a genre that is political in itself, to critique certain systems through fiction.

I also had the opportunity to meet readers and sign books at DragonCon! It was so much fun to share this booth with fellow authors, especially my pub sibs FT Lukens, Taylor Brooke, Michelle Osgood and Carrie Pack! We had such an amazing turnout and I sold out of all my copies of Not Your Sidekick and Seven Tears at High Tide!

in all of space and time… #dragoncon2017 #doctorwho

I also had a great time attending panels that my fellow authors were on!

so excited for EXPLORING RELATIONSHIPS IN YA w the amazing @ftlukens #DragonCon2017 pic.twitter.com/dm96p2NaL6

We also had a lot of fun hosting #BiSciFiQuest, a scavenger hunt where people entered by finding a few clues! Thanks to all the participants! 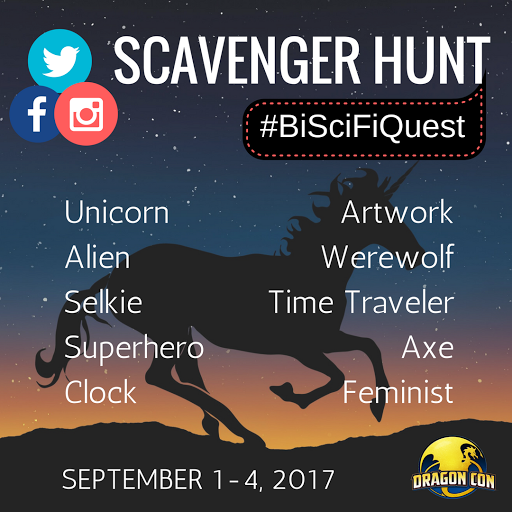